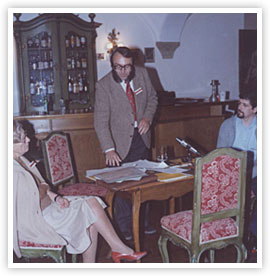 1978, Meeting in Ising (Germany) as starting point for later creation of an international Dalmatian association

In November 1976, the German Dalmatian Club (DDV v.1920 e.V) did invite all existing European Dalmatian Clubs for a joint weekend in Ising/Germany. Patron of that meeting was Mr. Schuster, president of the DDC at that time.

Participants came from Yugoslavia, Hungary, Austria, Switzerland, Spain, England, Benelux countries and Sweden. Around 44 people from 9 countries did represent the condensed expertise on all topics and questions concerning the Dalmatian Breed.

Though there were many sensitive Topics to discuss during these days (e.g. concerning the breed’s standard), the meeting was very productive and created directions for the following years. The common discussions created countless learnings and a healthy exchange of experiences made in the respective countries.

Nowadays, the international exchange between the local Dalmatian associations is pretty much established and especially the European clubs have a lively interest in exchanging knowledge and experience across borders.

In that early days of WAFDAL, Mrs. Hilde Buchner from Velden, Austria noted in a meeting protocol the following statement concerning this very first meeting in Ising, Germany: „ (..)with joint decision from all present countries it was denied to accept the appeal of Mexico to send a resolution to the FCI in order to keep the former (old) breed standard for Dalmatians“. The in depth discussion of the Standard and an agreed translation from English to German was one of the major outcomes from the meeting in Ising. Very lively was the discussion of the standard height for Dalmatians in those days.

Another key topic of this first joint international meeting was the discussion and presentation of the respective breeding activities of each local club, as well as the presentation of club statutes, breeding guidelines, judging guidelines, membership management and so on. At the time a very valuable exchange for all clubs, as Internet and easy exchange of knowledge did not yet exist compared to today.

1993 the creation of the first European Dalmatian Association

Some years later, on May 10th 1993 another international meeting has been organised to bring together the country clubs.
Mr. Csekö, president of the Hungarian Dalmatian Club, invited all country clubs to Budapest with the intent of creating an European Dalmatian Association which would align all Europan Clubs.

In that year, the so-called „EUROPEAN DALAMATIAN UNION“(EDU) was founded. Mr. Csekö had the vision of a yearly joint club winner show (judged by an aligned breed standard) in parallel to a yearly conference meeting of the Dalmatian clubs. A yearly event, which would bring together the experts for all breed related topics and trigger the exchange of knowledge, the alignment of club statutes, histories, exchange of health topics, etc.

On September 4th, 1193 another meeting was organised in Dornbirn, Austria to meet in an international setting (Ute Körbs, Germany, Gyula Csekö, Hungary, Jelle Huizinga, Switzerland, Attila Duba, Croatia, Oleg Fintora, Slowakia and Jürgen Toft Jessen, Denmark).
That meeting created the idea for a potential future set up: election of an international committee and presidency, as well as the set up of different commissions to cover the different topics (breed, breed standard, health topics, judging activities). Such a set up would allow more focused exchange on particular topics especially concerning breed standards/judging activities and related discussions of judges cross borders.

The meeting minutes of those times show, that another meeting was proposed for October 22, 1994 in Ising, Germany and for May 6, 1995 the first bigger European Dalmatian meeting with a joint dog show was organised during the frame of the 75th anniversary of the German Dalmatian Club from 1920 e.V. in Bensheim, Germany. The festivities were held in Bensheim under participation of the international member clubs.

At the meeting in Braschaat, Netherlands on March 02, 1996 it was proposed to change the name of the European Association. The former European Dalmatian Union became the „European Cooperation of Dalmatian Clubs (ECDC)".

More international meetings were held in the course of the following years:

The 9th international meeting took place on August 2009 in Oslo, Norway. At that meeting, the decision was taken to change the name from European Cooperation of Dalmatian Clubs (ECDC) to „World Association For Dalmatians“ (WAFDAL).

The 10th international meeting took place in Austria, during the festivities on May 20, 2011 for the 40th anniversary of the Austrian Dalmatian Club (ÖDC).

WAFDAL meetings are now organised bi-annually. In general, there is a joint member meeting on the first day, often including presentations on specific topics. On day 2 and 3 the termination of dates for the dog shows is a major topic. A CACIB show and a WAFDAL show with specialty Dalmatian judges is run in parallel of the WAFDAL meetings.

On May 1, 2015 the 12th WAFDAL meeting took place in Prague, Czech Republic